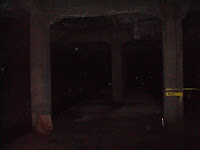 Ok, so maybe I should have been getting ready for my trip today, but when the opportunity comes up to visit and tour your city's 90 year old- never-used- subway it was hard not to go. The Cincinnati Subway is famous for literally never being used. It was constructed in the 20's, but they only were able to build half of the track. And money ran out before they were able to put in rails or electricity. Plus, the couple of subway car companies they were going to use went bankrupt and the remaining ones' cars were too big for the tunnel. In its entire lifetime, the city has come up with hundreds of schemes to use the space. A bomb shelter, a light rail, etc. But they have not done any of those, so it is literally a tunnel under the city that goes nowhere for nothing. (Well not totally nothing they have an emergency water line and telecom wires in there, but they do not take up even a quarter of the space.) Fascinating, talk about stuff that urban legends are built on! It was one of the coolest places I have toured. It is a completely finished structure, with platforms and stairs and even rooms for bathrooms- but no cars. The tour is completely in the dark since there is no electricity. It is quite the production to tour it, since they have to turn off the water line and use the police to stop traffic to get in. We heard that there is a ghost of a horse living down there, but we didn't see it on our tour. The fantasy of a real underground city that is an actual reality for us was incredible. So really, how could I have passed that up?
Yes, I may have thrown my entire wardrobe in the car instead of packing. But who needs organized and packed luggage? I have a really cool memory instead.
Taping for Knitting Daily TV starts at 830am tomorrow for Kim and I. We go to makeup at 7am. I am so excited to be taping, I am sure it will be a rough night of trying to sleep so don't mind my huge circles whenever you get to see it this fall. With luck I should have some behind the scenes shots for you all.

As a Cincinnatian, I appreciate the info! Also, have fun and good luck with your tapings!